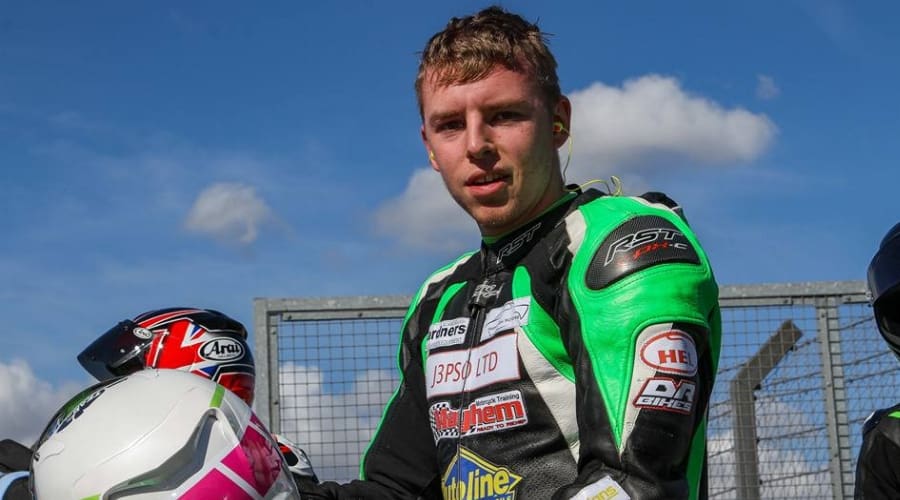 Ben grew up in Scarborough in a family of motorcycle lovers. His hobby quickly became so much more and he decided that he was going to race.

Ben saved up and bought his first bike in 2015, a Suzuki SV650 Minitwin and competed in:

His racing career encountered its first hurdle when he broke his hand and little finger in the first round, however, despite this he still picked up six trophies at Derby Phoenix.

Ben competed at Thundersport GB, starting in the Stocktwins and then progressing through to the Supertwin halfway through the season, preparing himself for the 2017 Season.

Ben competed in the Supertwins, finishing 4th in the Championship with 7 podiums across the season. He describes his best result being a double podium at Oulton Park with two 3rd places.

Saw Ben progress from finishing 24th in the first Thundersport GB 600 Elite race, to finish 8th by the 5th round. Had a very promising round with No Limits Racing at Croft, getting 4 top 6 finishes in the Pirelli Super Series 600 class. Competed in 2 wildcards in British Supersport with a 20th place at Cadwell Park and a 24th place at Oulton Park. Lat round of the season for No Limits Racing at Donington Park, Ben was given the opportunity to ride the Kramer HKR Evo2 bike i the Supertwins class. Ben took four 1st places in class and a 4th, two 3rd's and a 2nd place overall in the race.

Ben competed in 8 rounds of racing, 3 rounds with No Limits Racing and 5 Rounds in the British Supersport series. A mixed bag of results with No Limits, from best of 8th place at Donington Park, to battling for a podium before a mechanical issue forced retirement, to a horrific weekend of confident riding in the wet at Oulton Park.

The 5 rounds of British Supersport were a bit more positive. 16th place at Oulton Park, 15th place at Cadwell Park, 17th place over at Assen and a 14th place at Donington Park.

2020 will see Ben compete in 8 rounds of the British Supersport series;