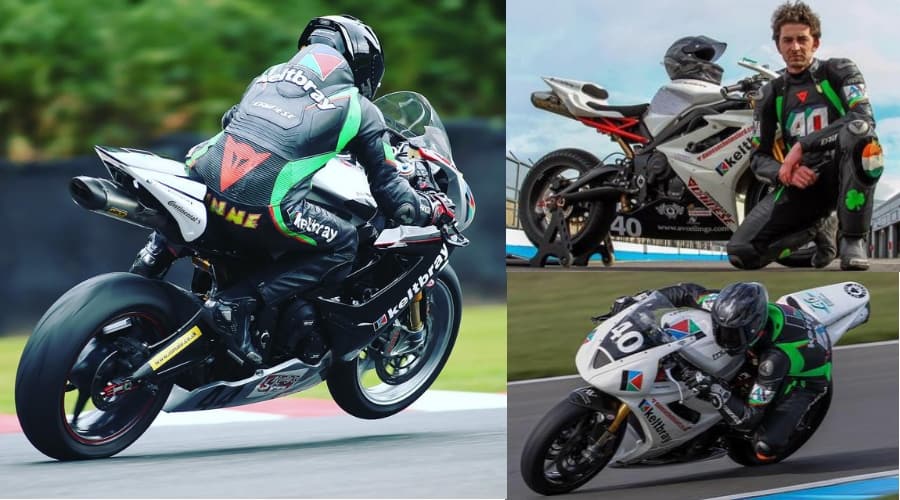 From an early age James has always had a passion for motorcycles and at aged 16 he purchased his first motorcycle, a Derbi GPR 50R.

James made his debut into the world of racing in 2013 after returning from Afghanistan to ride for Roger Stewart racing on a Honda RS125GP at the stars of Darley which attracts some of the country’s top road racers and finished an astonishing 4th place.

After this successful first race weekend James had caught the bug for racing and planned his next moves.

After leaving the Army, James competed n the North Gloucester Road Racing Powerbike Championship on a 2003 Yamaha R1 with only basic modifications and achieved top 15 results. Sadly due to lack of funding, James was only able to race four rounds in this year, but this only served to instill more passion for the sport.

James moved on to Thundersport GB on a new machine, an ex-Isle o f Man TT Hydrex Honda CBR1000 RR. Moving into such a fast and competitive championship was an eye-opener for James and the first round at Brands Hatch was a disappointing one.

Then at Donington Park a heavy crash almost saw the end of the weekend, if not the season, but after reviewing the situation and a five hour round trip to get parts, James and his team rebuilt the Honda. The next day James, against all odds achieved a second place and fastest lap in his class! But again budgets and mechanical issues ended the season prematurely.

James, on his new bike, a Triumph Daytona 675 competed in multiple championships. He joined The British Army Endurance Racing Team by invitation due to his previous military service and was a regular in the No Limits Racing Paddock and made waves in the Endurance Class aboard his Triumph as well as dipping in and out of the Thundersport GB 600s Classes.

James stepped up to the Ducati Trioptions Cup within the British Superbike Championship on a Ducati 899 Panigale, riding for Highsparks Motorsports, but due to differences within the team, he retired from this season early.

In November, James swapped his Triumph for a Kawasaki ZX10R and then in December spent a few days on track in Almeria testing his new machine in preparation for the new season.

James, with his passion returning, formed again under his own banner and on his Kawasaki ZX10R is returning to the Thundersport GB Paddock. Determined to put the past behind him and achieve personal goals, James will take to the grid in the heavily contested Thundersport GB GP1 Elite.

Race 1 - Issues with transponder, wasn't holding charge, and failed to log a lap time and position, which resulted in a registration on the time sheet as 'DNF', which was disappointing for James, but as he said 'these things happen'.

Race 2 - James had a good start and was pushing hard to try and improve on Saturday's results. Sadly on Lap 4, as he came out of Goddards Chicane, his left-hand foot peg detatched from his bike and forced him to retire along the start finish strait.

Race 3 - Went a lot better and James managed to log his fastest lap of the weekend. Starting 34th on the grid, he kept his head down and rode consistently, determined to finish the race and avoid taking any chances that might end in disaster and he finished 24th, a result he was pleased with.