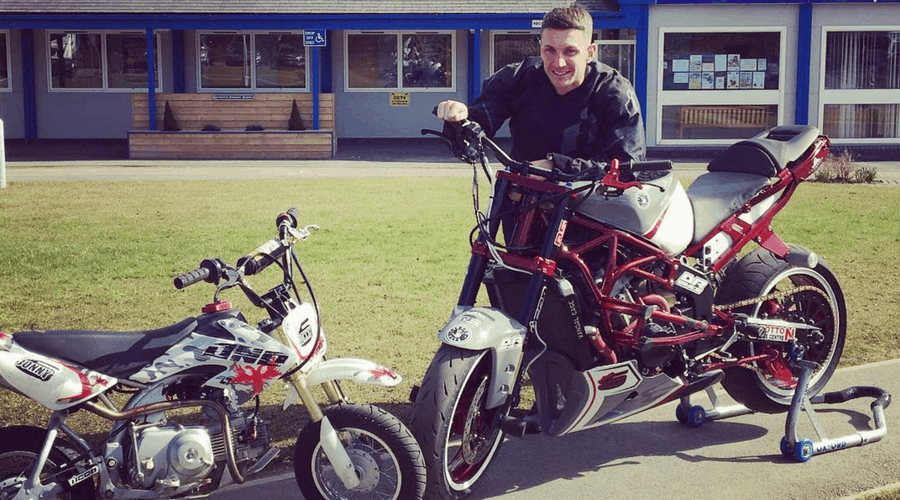 Jonny grew up in Durham where he still lives. He was introduced to the motorcycle world from a very young age due to his parents both being motorcycle enthusiasts. He was given his first motorbike, a Yamaha PW50, for Christmas when he was aged just two! He soon learned the basic bike controls and even managed to do some burnouts.

Throughout his childhood he was taken to various motorcycle events and watch the Stunt Shows in awe; it became his dream to perform a Wheelie, Stoppie and Burnout and would practice on his bicycles and Motocross bikes.

He saved up and at the age of 22 bought a Honda CBR600 F4I which he adapted, with the help of his Dad, so it had all the necessary stunt modifications and began his Stunting career.

He discovered Stunting Competitions held throughout the year through Facebook, so after a year of honing his skills he entered and came 10th which he was "over the moon with". He has since progressed and his best place so far is 5th - but is hoping to better this in 2018.

After two years of Stunt Riding he sold his Honda CBR600 and replaced it with a 2003 ZX636 Ninja.

After a successful first year, Jonny returned to the second Scottish Stunt Championship bigger and better than ever and placed 1st in the Freestyle Competition!