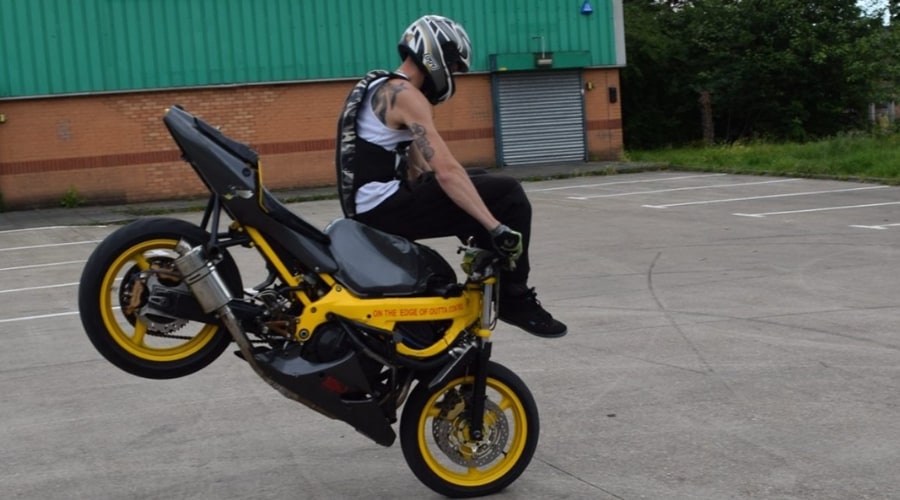 Marco's family always had motorbikes for as far back as he can remember; his Dad had a powerful Kawasaki ZX12R and his Uncle had a Yamaha 2000 YZF R1, so all he wanted to do as a kid was to go fast and chase adrenaline.

His riding career started when he was about 14 on an old Yamaha DR125 that he used to tear around the woods on. The first thing he learned was to knee drag and to pop it up on the back wheel, but after a few months he was bored of being limited to 55mph and so started saving hard to get a 600.

When he was 16 he bought a Suzuki SV650S and was out on with his friend every second that he was not in college or at work. It wasn't long before he could bank it through the box on the back wheel and knee drag every bend in the road; he describes it as "the ultimate feeling of freedom"

Marco then discovered club racing and spent a few years racing with Thundersport GB in the Minitwins and Superstock 600 categories.  He hadn't forgotten his love of stunting and even when he came tenth would wheelie the straits for the crowds like he had won the championship, resulting in black flags and unhappy Marshalls. After 2 years of competing he had a huge crash at Snetterton which ended his racing career and dreams leaving him miserable and fed-up.

He was at the Ace Cafe when he saw a bike with a metal cage on it, 'like something out of Mad Max' so he followed this bike to a car park near the cafe and watched as a group of riders in matching hoodies and bikes performed impossible tricks. The team was one of the original UK Stunt Teams. AFL, and for Marco this was a life changing moment. Stunting was to fill the gap that Racing had left.

His favourite tricks are Acros and he is alway pushing these in unusual ways which results in either looking awesome or hurting a lot.

In his free time, Marco teaches at the Stunt Asylum Wheelie School.

Marco is also one 'half' of the StuntCraft Team, the other 'half' being Paul Jennings. Both have competed throughout the UK and entertained crowds nationwide. This year he will be going after his first Guinness World Record