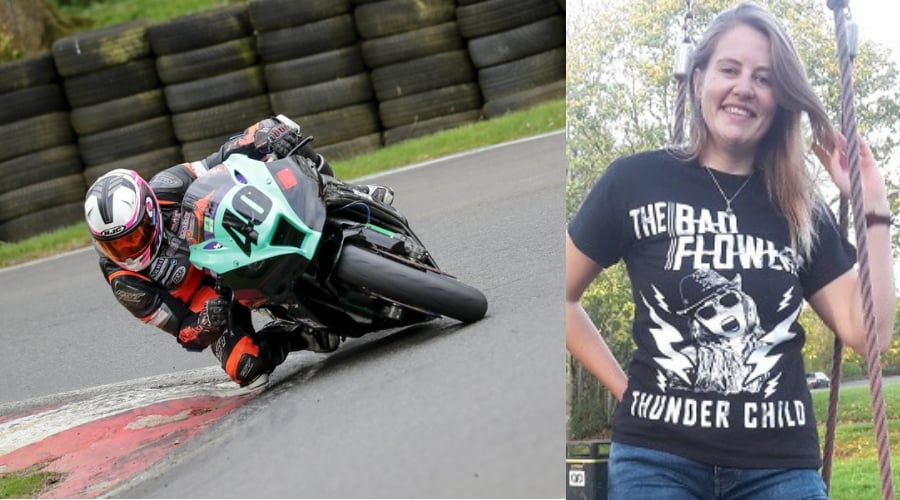 Nadieh has always had an interest in bikes and racing and got her hands on her first minibike at age 14. It was love at first sight!

For the next 4 years Nadieh and her dad traveled all over Holland and Europe for various competitions.

At 18 she was able to take part in a 3-day training with The Race Academy, on her first bike with suspension and a clutch, a standard road Aprilia RS250. Mid-day on the first day she was scraping her knee, and by the end of the day she was scraping the exhaust, and by the end day 3 she was the third fastest out of all riders present (who were all on 600 and 1000cc bikes).

Considering how well this went, Nadieh and her family decided to simply step up to 600cc Supersport racing the following season.

Over 2010-2013 Nadieh was able to race multiple bikes at a large number of beautiful circuits, from Spain, to Czech Republic, to the USA. Racing was still more a hobby though, until 2014, when after re-watching “TT3D: Closer To The Edge”, she decided to want to compete at the Isle of Man TT.

The first step in this journey was racing in the British Superbike paddock, thus commencing two (half) seasons in the BSB Ducati TriOptions Cup - aboard a Ducati 899.

Nadieh stepped up to the extremely competitive BSB Superstock 1000 class. Riding for Team ILR this seemed a dream come true, however things did not quite work out how expected, and the season ended early in major heartbreak.

The important lessons learnt during this tough year did prompt Nadieh to properly run her own team moving forward.

Nadieh and her newly formed team acquired a beautiful Kawasaki ZX10R, set their sights on road racing, and competed in the full season of IRRC Superbike – a big step towards competing at the Isle of Man TT. IRRC is a European based road racing competition, with races in The Netherlands, Belgium, Germany, Czech Republic, and Finland.

The team, without any pressure, worked their way up from P25 at round 1, to finishing P10 at the 6th and final round of the year. Nadieh was the first woman to ever compete in IRRC, came 14th overall (out of 40+) in the Superbike class, broke the fastest female record at every circuit they visited, set a fastest race lap at Schleiz, and last but not least: became the 2017 outright (and all-time top 15) fastest newcomer at the “Czech TT” of Horice (the most dangerous circuit on the calendar).

The team will once again race the full season of IRRC Superbike with their ZX10R, now aiming for a top 10 position in the championship.

They will also return to racing in the UK, making their debut at two of the biggest road racing events in the world: the North West 200 and Ulster Grand Prix.

In addition, they plan to compete in UK club racing series for testing.